So the other day I found an old script I created when vCloud 9.0 was still hip and happening. I was wondering if this script would still work with newer versions of vCloud and in particular the API version. So in this blog I will show you which API versions are supported by vCloud.

So I went on a google search to find out how to figure out which API version is still supported. In this blog I will share with you my findings.

To find which API version is still supported by vCloud I browsed to https://<vcd url>/api/versions and found the below displayed information. 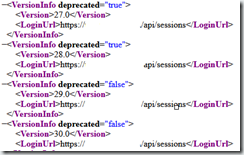 As you can see from this example version 27.0 is deprecated.

Here I found the following info:

As you can see a lot of API versions “still” supported by vCloud and my vCloud 9.0 script should also still work with the newest versions of vCloud.

I can hear you thinking, why did you not just run the script and see if it still works? Well the answer is really simple; If I would have done that there would not have been any reason to write this blog.